When should one consider combining ventral hernia surgery with abdominoplasty?

In addition to having a diagnosed ventral hernia from whatever cause, two conditions account for about 95% of patients interested in combining hernia surgery with abdominoplasty. One condition is associated with women who have had one or more children, which left them with stretch marks and an abdominal wall musculature permanently deformed by carrying a baby. The other is the result of massive weight loss, where the patient develops folds of overhanging skin. In either case, abdominoplasty is required to correct for substantial and unsightly tissue and skin.

Generally, a hernia is any condition where an internal organ escapes its surrounding tissue and forms a pocket or sack. In this case, a ventral hernia is a break in the abdominal wall where intestine or abdominal tissue pushes through the break. There are several potential causes including birth defect, genetic weakness of the wall and most commonly, weakness caused by abdominal surgery such as appendectomy and C-section childbirth. Quite often, ventral hernias are called incisional hernias because their origin is related to cuts (incisions) of previous surgery. Hernias caused by incisions occur in about 30% of patients who have had abdominal surgery.

Why hernias are dangerous

Obviously, when an internal organ slips out of its usual position and breaks through its cavity or container of tissue, it’s not a normal situation. Usually there is pain and very often, some form of dysfunction in the organ, such as a blockage. Occasionally the organ, especially the intestine, becomes twisted or in some way entangled so that it is cut off from normal function and blood supply. This is the so-called “strangulated hernia,” which is always a serious medical condition usually requiring immediate surgery. If it isn’t corrected, there can be serious complications including infection, tissue death and release of toxic fluids.

Surgery for repair of a ventral hernia

As with most forms of abdominal surgery, there are two general approaches to repairing a ventral hernia:

These days the laparoscopic approach is often preferred because it minimizes the surgical trauma and shortens the recovery period. However, a patient with a history of abdominal surgery and possible complications from tissue adherence and previous incisions may not be a candidate for laparoscopic surgery.

When it comes to repairing a hernia, neither open nor laparoscopic approaches do anything for the appearance of the tissue and skin. The goal is to repair the herniated area, not to make adjustments in the tissue or fat of the abdomen. That sort of work is a separate procedure, the abdominoplasty, which is why the two operations are sometimes combined but usually performed by different surgeons.

Abdominoplasty is mainly reshaping of the skin, muscle and fatty tissue of the abdomen, usually by removing skin and fatty tissue. This is purely cosmetic surgery, even when combining it with hernia repair.

The colloquial name for abdominoplasty – “tummy tuck” – unfortunately tends to trivialize the operation. While a common and safe surgical procedure, it is nevertheless a serious operation requiring from 1 to 5 hours in the operating room, local to general anesthesia, weeks of recuperation and entails risks just like any other relatively major surgery.

The primary incision for abdominoplasty is a horizontal cut from across the waist over the pubic bone. In a complete abdominoplasty, the surgeon usually also makes an incision to free the navel area from the surrounding skin. With partial abdominoplasty, the initial incision is smaller and the amount of tightening and fat removal is less.

Once the primary incisions are made, the skin is detached from the underlying tissue and the muscles and fascia of the abdominal area are cut or sutured to tighten them. Very often excess fat is either cut out, or these days, removed by liposuction. Finally, the skin is cut to fit the new shape of the abdomen and the ends of the skin sutured together.

The final suturing of skin is a delicate piece of work; some might say an art form, as the difference can be a highly visible and permanent suture line, or one that becomes almost invisible over a year or two. However, the position of the abdominoplasty incision, just above the pelvis, is usually not visible even when wearing a two-piece swimsuit.

Recovery from abdominoplasty is similar to that of any abdominal surgery. Heavy lifting or strenuous activity, including most sports, is not recommended for weeks after the surgery. There is always the possibility of infection or blood clots. How long it takes to recuperate depends on the individual, their health condition and the scope of the surgery, but full recovery often takes from three to six months.

What types of conditions typically lend themselves to a combination ventral hernia and an abdominoplasty?

In many respects, a ventral hernia repair and the need for abdominoplasty share some common conditions. They are both the result of stretching and pressure on skin, abdominal tissue and musculature that weakens the abdominal walls. It doesn’t make much difference whether the stretching was caused by carrying a baby or from carrying excessive abdominal fat, the results can be very similar – the abdominal wall becomes prone to hernia.

In a similar way, the two most typical conditions are childbirth with C-section and massive weight loss. They often leave already weakened muscles, tissues and skin of the abdomen in a fragile condition. Developing, or redeveloping, a hernia is relatively common. That’s a big reason why it often makes sense that an operation to repair a hernia is followed by an operation to stabilize the abdominal wall and firm up the covering skin and tissue of the abdomen through abdominoplasty.

One of the effects of childbirth, for obvious reasons, is stretching of the skin, fascia and muscle of the abdomen and upper hips. Some of these wrinkles and distortions disappear post-partum or can be reduced through exercise, but sometimes they become permanent or increase with additional childbirth. Some women consider “stretch marks” unsightly, making them candidates for abdominoplasty.

Umbilical hernias may develop or grow larger during pregnancy

Coupled with the stretching of the abdomen, childbearing may produce an umbilical hernia, one that involves the remainder of the umbilical cord. About 10% of women already have a mild form of umbilical hernia – the “outty” belly button, which can become stretched and pushed into a significant umbilical hernia during pregnancy. However, much more common are ventral hernias associated with C-section childbirth.

While a ventral hernia can occur with any abdominal surgery, it is most common with the C-section (Caesarian childbirth). In fact, it is one of the most serious risks of that procedure, occurring in roughly 10% of patients. The typical C-section operation is primarily through a horizontal ‘bikini’ incision (along the line at the top of a typical bikini), technically called a Pfannenstiel incision. However, once the skin is cut, access to the baby usually requires a vertical incision splitting the muscles and fascia of the abdomen. This cut is most likely to result in a lower-abdomen bulge that may later contain a ventral hernia.

Generally it takes some time before the hernia develops, anywhere from months to years. It’s usually noticed as a lump or raised area near the area above the horizontal C-section incision. There may or may not be pain or tenderness associated with the lump, but it should be checked by a physician as soon as possible.

In these days when many people are fighting obesity and especially morbid obesity where medical conditions related to the weight have already appeared, people undergo various approaches – diet, bariatric surgery, physical therapy – to lose a massive amount of weight as quickly as possible. The result, when the approaches work, is folds of skin and fat sagging from the midsection. Many obese people are already candidates for abdominoplasty.

The condition of obesity itself contributes to the possibility of a ventral hernia. Years of carrying extra forward weight in the abdominal area has a tendency to weaken muscles and the abdominal wall that eventually may lead to loose, weak or torn tissue and a ventral hernia. Some people only discover the hernia after they lose significant amounts of weight.

Another quite common cause of hernia associated with obesity is the result of bariatric surgery, where various techniques are used to decrease the size of the stomach and/or bypass some of the digestive process. Up to 20% of all patients who had open bariatric surgery develop an incisional hernia. When bariatric surgery is performed by laparoscopy, the risk of hernia is much lower.

Since the hernia is a medical condition (covered by insurance), and the abdominoplasty (cosmetic surgery not covered by insurance), combining the operations can in some cases make sense in terms of combining cost as well as recovery time. That is, the patient goes through only one surgical session and hospital stay for both procedures. This combination consolidates the recuperation, physical therapy and need to arrange for help around the house and time off of work.

What is a Hernia? 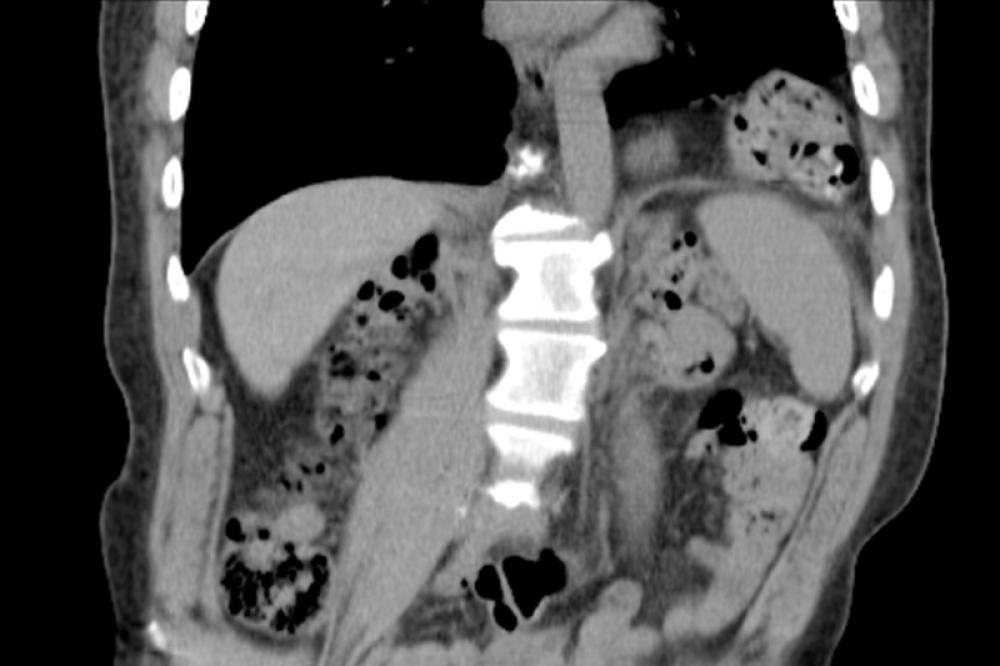 A hernia is a condition in which a part of an organ pushes through the opening of the organ wall made up of muscle tissue or membranous material. Hernias are usually treated surgically. If the blood supply at the herniated portion is cut off then it becomes a medical emergency. Muscle weakness and straining too hard at an activity can cause hernias. Familial factors are probably the most common contributory causes. Smoking and diabetes are lifestyle choices that impair the strength of our natural tissues and can contribute to the formation of hernias as well. 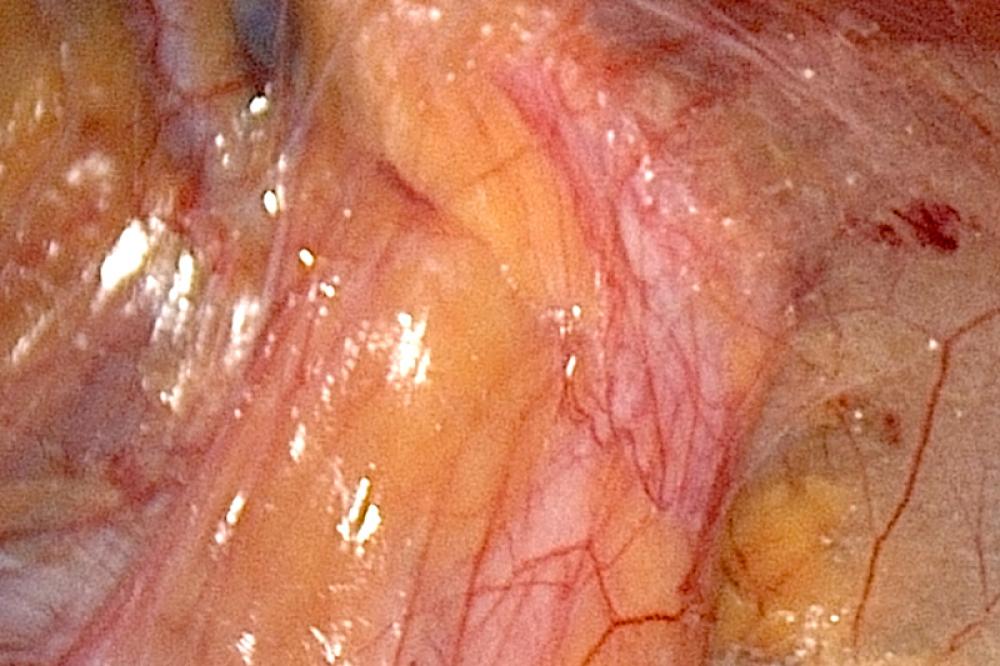 Hernias that occur in the groin are known as inguinal hernias. These are characterized by small balloon-like pouches protruding from the groin region. These form at a natural point of weakness at the intersection of abdominal muscles. 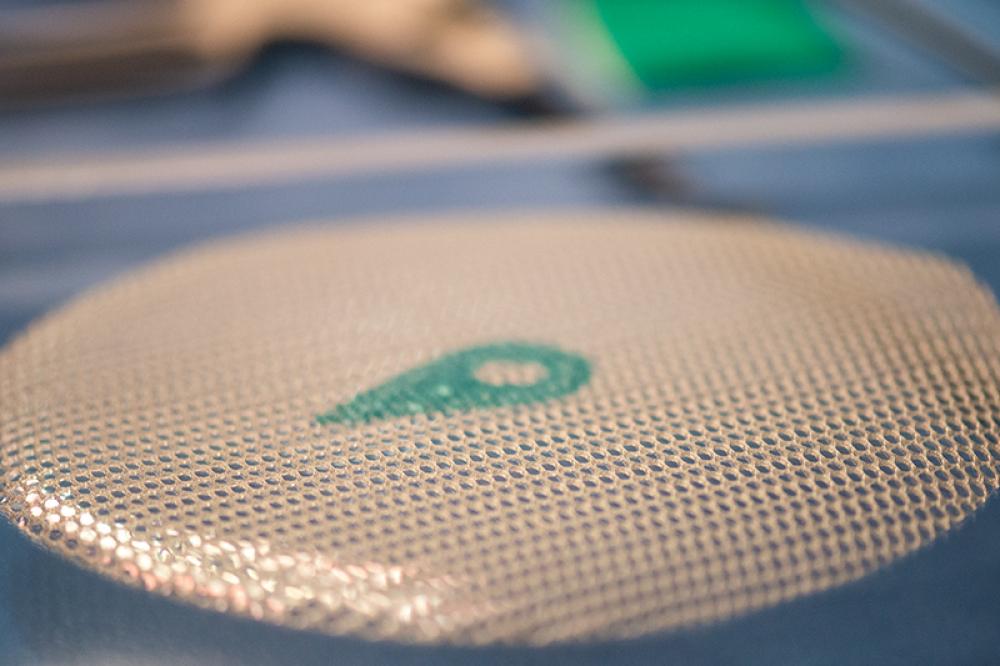 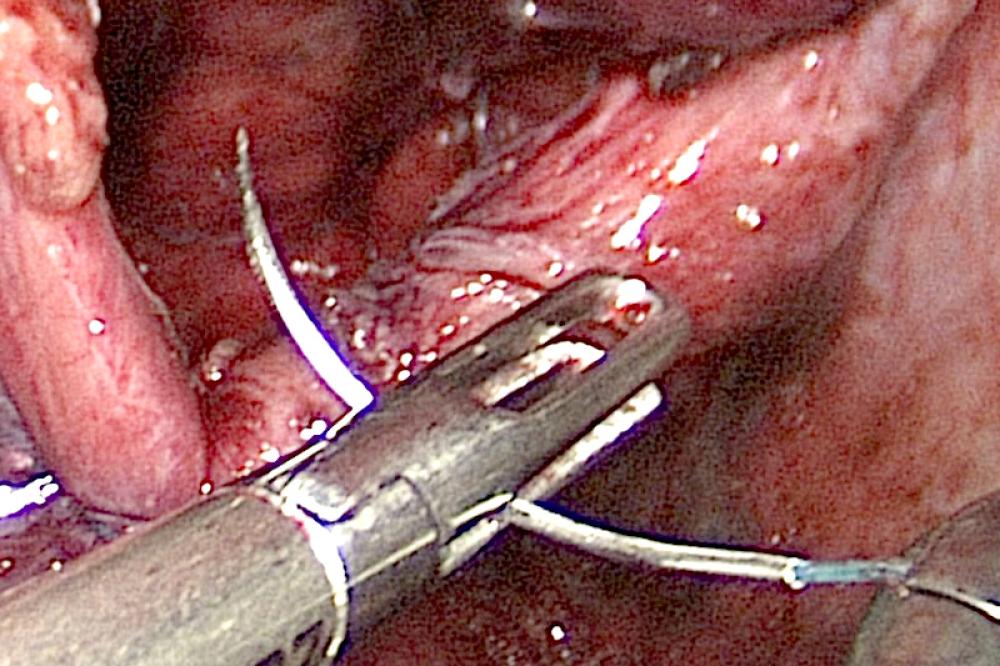 Although the hiatus is a normal opening, there are occasions when this opening enlarges and the stomach or other organs can slip up inside the chest. This occasion of an abnormally large opening of the hiatus is one kind of a diaphragmatic hernia called a hiatal hernia. 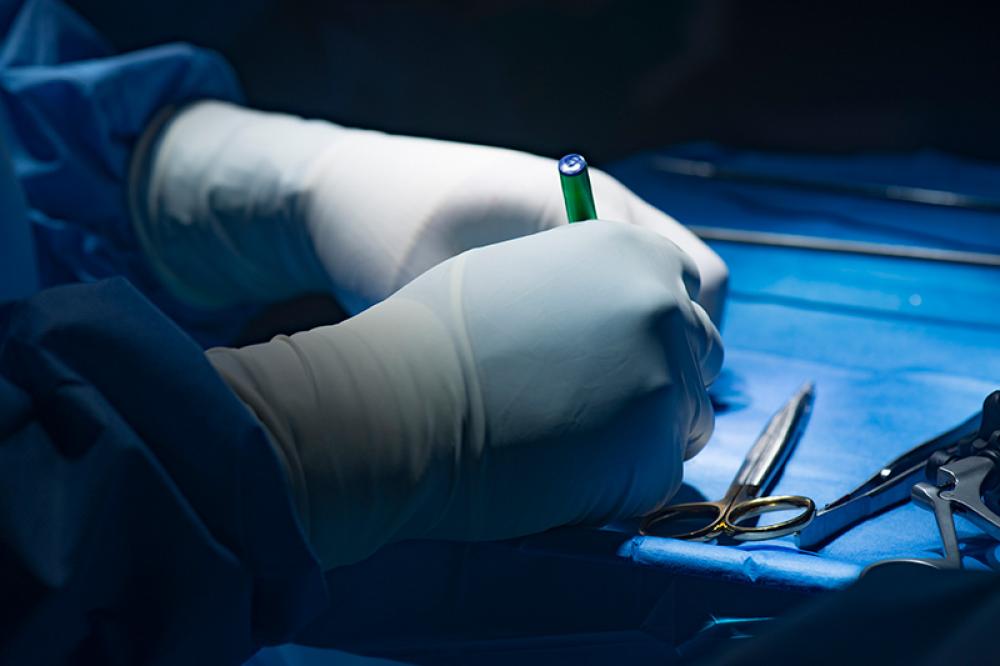 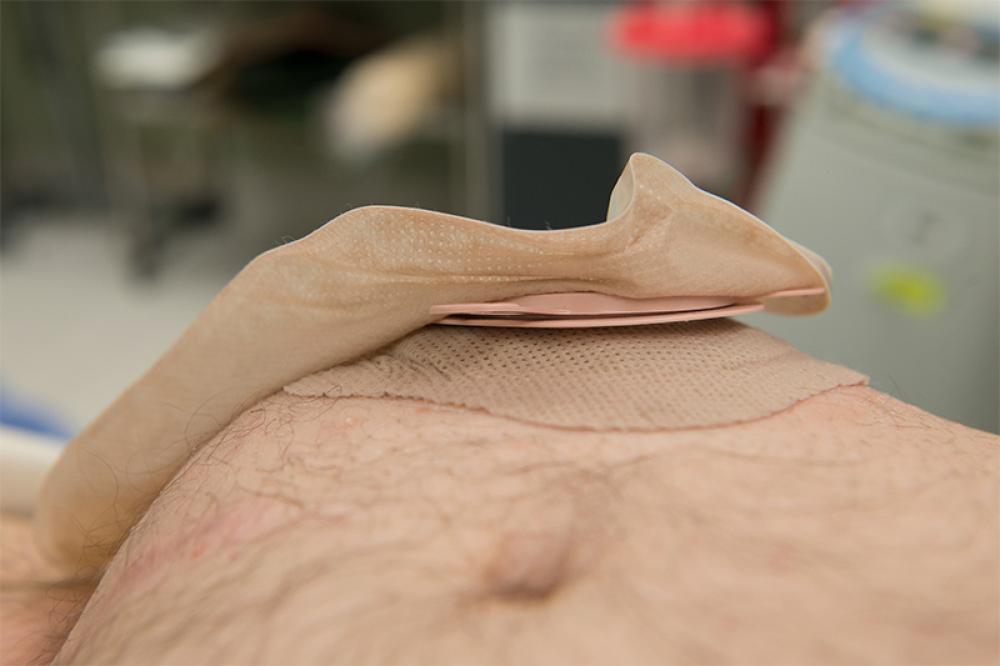 A stoma (ostomy) is a surgically created opening on the outer surface of the abdomen into an external pouch following removal of part of the bowel or urinary system. Parastomal hernia is a common complication of stoma formation. Various surgical management options exist, of which laparoscopic mesh repair may offer shorter recovery times and reduced risk of recurrence.

SAGES patient information for hernia repair. A hernia occurs when the inside layers of the…

A hernia occurs when part of an internal organ bulges through a weak area of muscle. Hernias are… 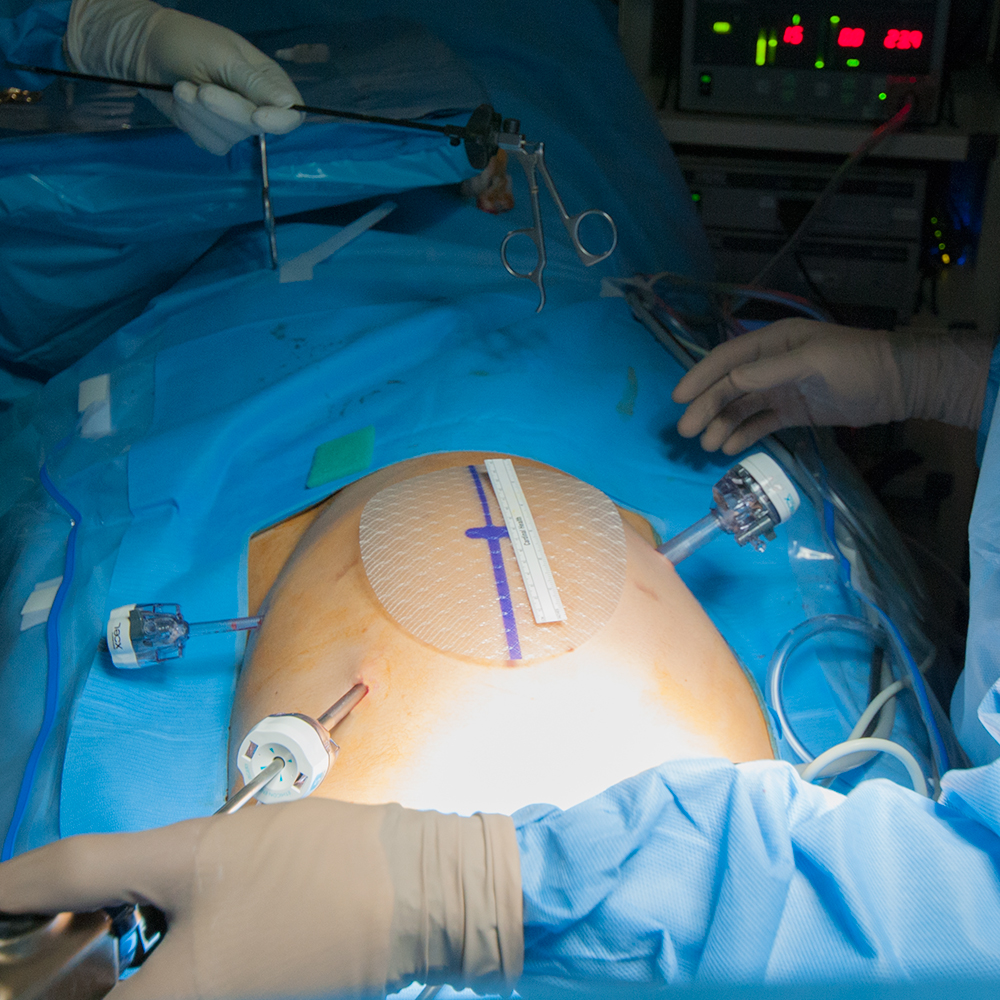 A hernia is a surgical condition that develops when a part of an organ, most commonly in the abdomen, pushes through an abnormally large opening in the muscle and membranous organ wall. Genetic predispositions…